All the Days of Your Life

My little brother got married this weekend, far away from his hometown of Carlisle, Pennsylvania, in the Madison, Wisconsin suburb of Middleton. The bride had hair like Rapunzel and a dress with a skirt that went on for miles. The groom, who wore his tux like, “yeah, I always wear these things,” ripped off his suspenders as soon as the ceremony was over because apparently, yech, suspenders. It was the best Catholic wedding I’ve ever been to–not too long!–funny, and touching, and personalized to the couple like none I’ve witnessed (the Gospel reading talked a lot about wine. So, there you go). I cried so much one of my fake eyelashes came partially unglued and started poking me in the eyelid. Nobody tripped. Or popped out of their dress/pants/etc. It was a success, as weddings go.

And there’s something sticking with me. The happy couple is on their honeymoon right now, road tripping through the American midwest. They’ve known each other for a decade, have traveled together as friends, so I’m hoping this transition to husband-and-wifehood will be an easy one for them. They’re both really easygoing people (teach me how, please?), so I’m thinking it will be. How many of you had a moment on your honeymoon where you looked at your spouse and thought, “What the hell have I done?” Anyone want to admit it? It’s scary stuff, this getting-married thing. So much focus is on getting the right flowers in the cutest vases on the tables at the reception (which, in this case, were perfect) that sometimes it takes a while to go, holy crap, I’m with this person for the rest. of. my life.

(I say this with the caveat [do I really need to do this?] that I really, really am happy that I married Dave–I do think God puts people into our path and nudges us their way for a reason, you know–and he’s the best person for me, etc, etc. But lest you think we’re perfect–and unless you’ve hung around us in any high-stress situation [or otherwise. HA]–I gotta bring you some truth. And truth, this is)

Dave and I got into a raging argument the Friday (or Thursday? I forget. You know how it is) before the rehearsal. I seriously don’t know what started it is (he probably does, and will tell you if you ask), but it was a doozy. I mean, an I-can’t-stand-you-what-the-hell-are-we-doing kind of a doozy. Between being exhausted from traveling, and dealing with our dear pipsqueaks, who were also exhausted, and worrying about how the heck all of us were supposed to be in the wedding because oh my gosh the kids we have kids, and driving the worst rental Dodge Caravan you’ve ever encountered (I learned how to drive on my dad’s old Chevy S-10 pickup truck. This van sort of felt like home, but not in a good way.), we were a little stretched thin. And as so, so happy as we were for my brother and his wife–they are so HAPPY–there was no denying the sadness that snuck around underneath it all like a bad cheese curd (Wisconson: beer and cheese curds. There’s a reason people who live in that state love it so much). We knew we wouldn’t be seeing them as much after this, and that Dad wasn’t there for any of it was a little too hard to choke down. Weddings are supposed to be so yayayCELEBRATION all the time. No one warns you that with a big change there’s always going to be a little emotional wistfulness that gets in the way. Which all lead to the two of us arguing, in the car, so much and so long that Dave’s poor mom had to finally tell us to pipe down already because we were setting a bad example for the kids. Yeah, I know. That’s bad.

We made up by Go Time, because that’s what you do (doesn’t hurt that Dave looked really darned handsome in that best man tuxedo, and how can you fight with somebody you want to flirt with?), and it was silly anyway, but still. It’s so easy to treat the ones you love most the absolute worst, if that makes sense. Why do we do that? How does familiarity grant that kind of license? And we’re standing at the altar, watching Sarah walk down the aisle with the dress and the veil and the flowers, and we saw her wave at Paul in the cutest way, like “Hey, nice to see you here! Wanna get married?” They were so ready. I watched Paul make the longest eye contact with a human being I’ve ever seen him do (that’s looooooove!) and smile, and take her hand, and I glanced at Dave as they said their vows. Because we’ve said them, too.

I promise to be true to you

I will love you

all the days of my life.

Read that again, will you? It all sounds so easy. Two sentences, the priest says a prayer, and you’re married. Two sentences, and they’re all you need to adhere to for the rest of your natural lives together. Now, where’s the Champagne?

It’s so simple, really: I will be true to you. I will honor you.

It’s a promise. A matter of fact.

As it should be. 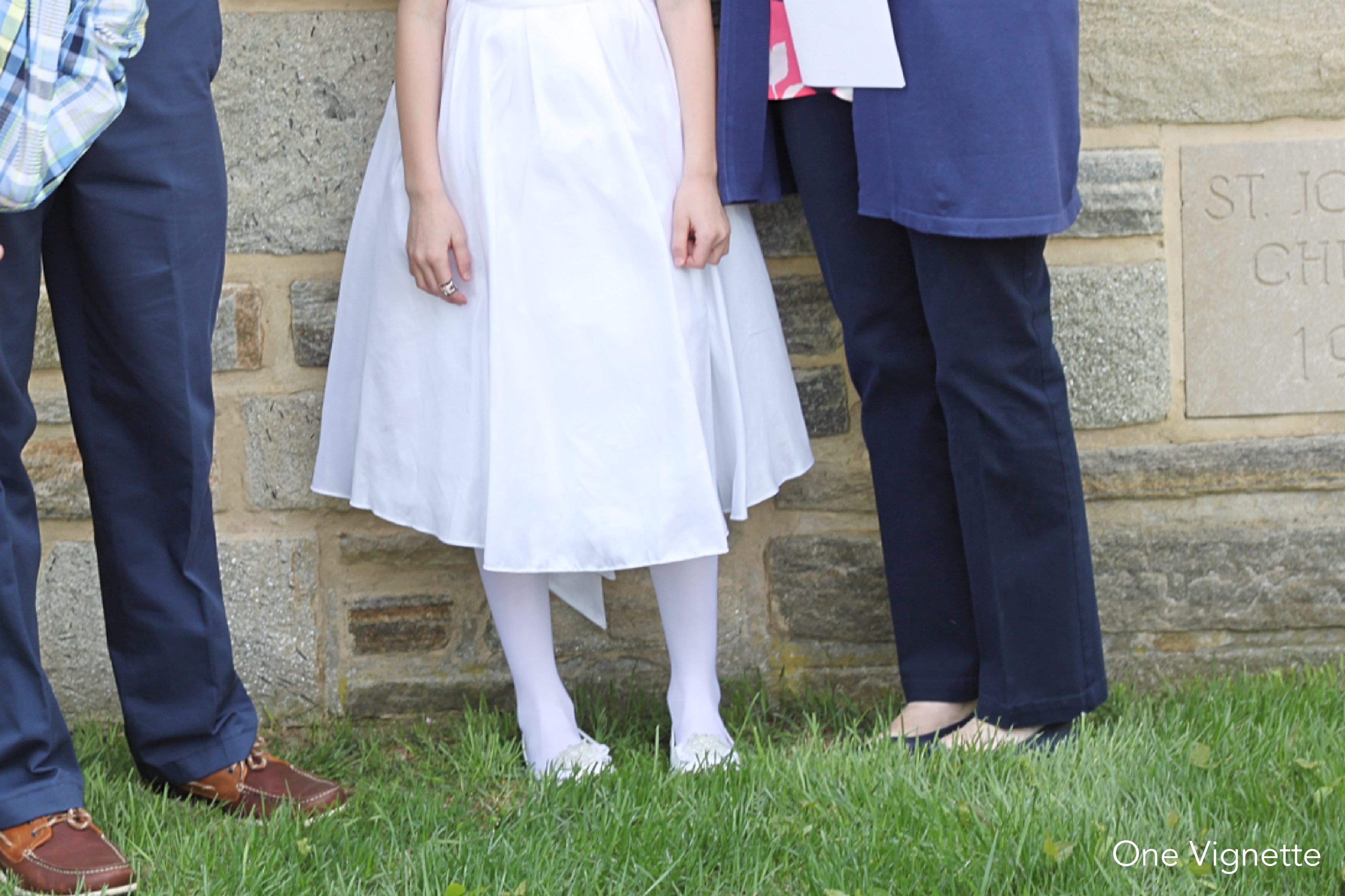 My youngest girl received her first holy communion this past Saturday. If you’re…

All of our biggest conversations happen in the car. We were on our way to…