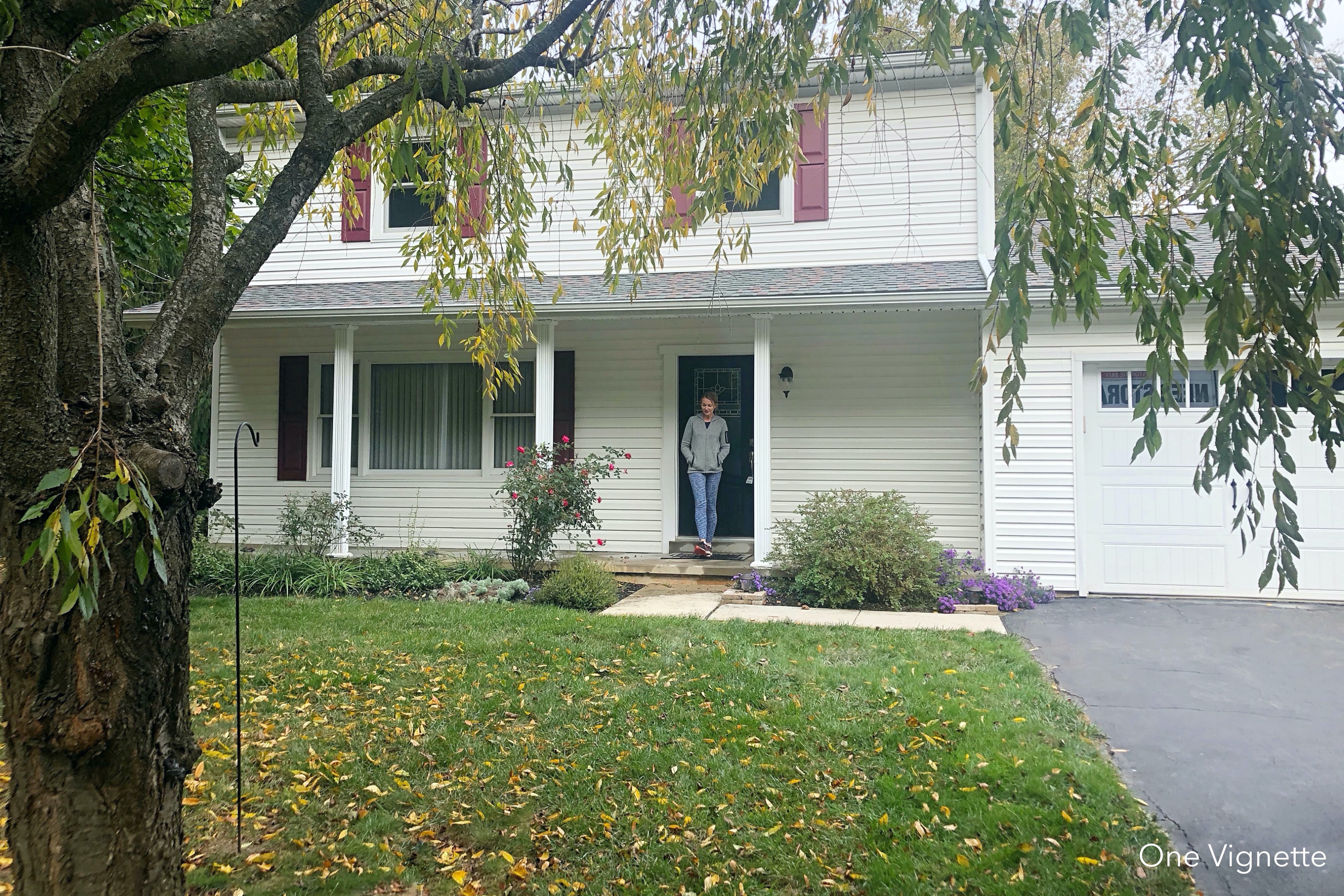 You guys, I’m working through something here (aren’t I always, though? I KNOW). The house that Paul and I grew up in is under contract. This is a relief, but it’s also a little like, Oh, hi! You’re buying my youth!

Here’s what goes through your head when you sell the house your parents built, raised you in, sent you off from, and continued to live in altogether for thirty-seven years:

You remember that it’s the house where you played catch with your dad, begging him to throw the ball up high because it was more fun to catch it that way. It’s where you and your brother used hammocks as swings, threw yourselves into piles of raked-up autumn leaves, and willed your sleds down the slight incline at the side of the property anytime it snowed. You walk around the perimeter of the property and you can see the memories play out in front of you, like thirty-seven years ago was as recent as yesterday.

You remember the smell of the sheets your mom hung on the clothesline on the warm days, or the scent of cut grass as she rode the big lawnmower around on Saturday mornings while your dad did the other outdoor chores. You can taste the iced tea they drank afterwards on the back patio–the patio before it became a sunroom. It’s where your dad had his garden full of asparagus and tomatoes in the very back of the yard, and where you and your brother were put to work picking up fallen sticks and tree branches outside, an acre of them, complaining the entire time.

You walk to the front, where the ancient basketball hoop still has a rotting net hanging there by a string. That’s where your dad and brother and the rest of the guys in the family would play basketball during summer get-togethers. It’s where you put a couple of new dents in your dad’s truck when you were first driving, and where you learned that you had to be in the car if it was still in reverse. It’s where your mom flicked the porch lights on and off that one night you took too long saying goodbye to a date.

You walk inside. This part is hard. You stand in the spot where you made your little family pose for pictures every Christmas Eve before Mass, even though nobody liked taking them and you were usually running late (you’ll continue this tradition with your own family now: old habits, and all). It’s where you watched the ball drop together on TV every New Year’s Eve as children, your parents each holding a glass of port in their hands. It’s where you gathered after your dad died, all of you in shock, staring at an episode of American Idol because you weren’t quite sure what else to do with yourselves. And back here, in the sunroom, is where you told your parents you were pregnant with their first grandchild. You and your husband were thrilled, over the moon, shaking. Your brother would tease you, and your mom would look at your dad because he was staring at the floor. He was in chemo then. The house would be empty of him by the same time the next year.

This modest, two-story house, where sound traveled as if through tissue paper and breezes flowed like water, was the home you read and wrote in, did homework in, listened over and over again to tapes of Whitney Houston and Def Leppard and Bon Jovi, then Depeche Mode and Siouxie and the Banshees and the Cure. You drew there, stared out the window there, talked on the phone (it was one of those clear ones, with an extra long cord). It’s where you kept all the notes passed from your friends in class, tacked up Greenpeace posters and mopey song lyrics. It was a house filled with your brother’s Mario Bros and He-Man and your dad’s Vogues albums and your parents’ Dallas and M.A.S.H. nights and those daily viewings of Weather World and PBS’ Nightly NewsHour. It’s where football was watched: Notre Dame and the Redskins, cheering and yelling and you sitting on the couch with a book because you’re fun like that. It’s where your husband drank coffee on early Saturday mornings with your dad when you visited from Baltimore, chatting while your dad cooked bacon on the stovetop. It’s the house you’d dreamt of leaving so you could make your own life, your own home, one day.

I didn’t like going back home for much of my adult life. This house, my old bedroom, always made me feel like I was retreating when I was there, like I was reverting back to my teenage self, those teenage feelings of being trapped in your own body. But spending so much time there these past two years has taught me to look at the place through my parents’ eyes. When I look at the family photos I took from the house, I’m reminded of parties and laughter and groups of us together there, talking. They built this little house on this pretty chunk of land. They didn’t have a lot of money, but they knew what they wanted to make together. They built this life, and my mom continued to keep it, for the both of them, these past twelve years.

I’m excited for the young family who buys this house to take it and make it their own (maybe they’ll put in a pool? We always wanted a pool). I hope they put in a new clothesline and a swing set and teach their kids to garden. I hope they laugh when the kids groan about having to pick up all the errant tree branches and sticks after the summer storms blow through. I hope they’re happy there. I hope they raise kids who are ready to leave but will come back to help them ready it to pass along to the next family when their turn comes, too.

This little house raised a family. It’s going to raise a new one now. If you ever have to do this, it’s going to feel like you’re saying goodbye to your childhood, but get this: the house is getting to be born all over again.

Maybe you do, too.

recent posts
Instagram
YOU GUYS. We made it through a pandemic Thanksgivi

This here is the face of a writer who wrote seven

I didn’t tell you we put my parents’ house on

Outdoor (cold! So cold!) lunch with David today at