We’ve Turned the Page on the Calendar, and You Should See the Bruise 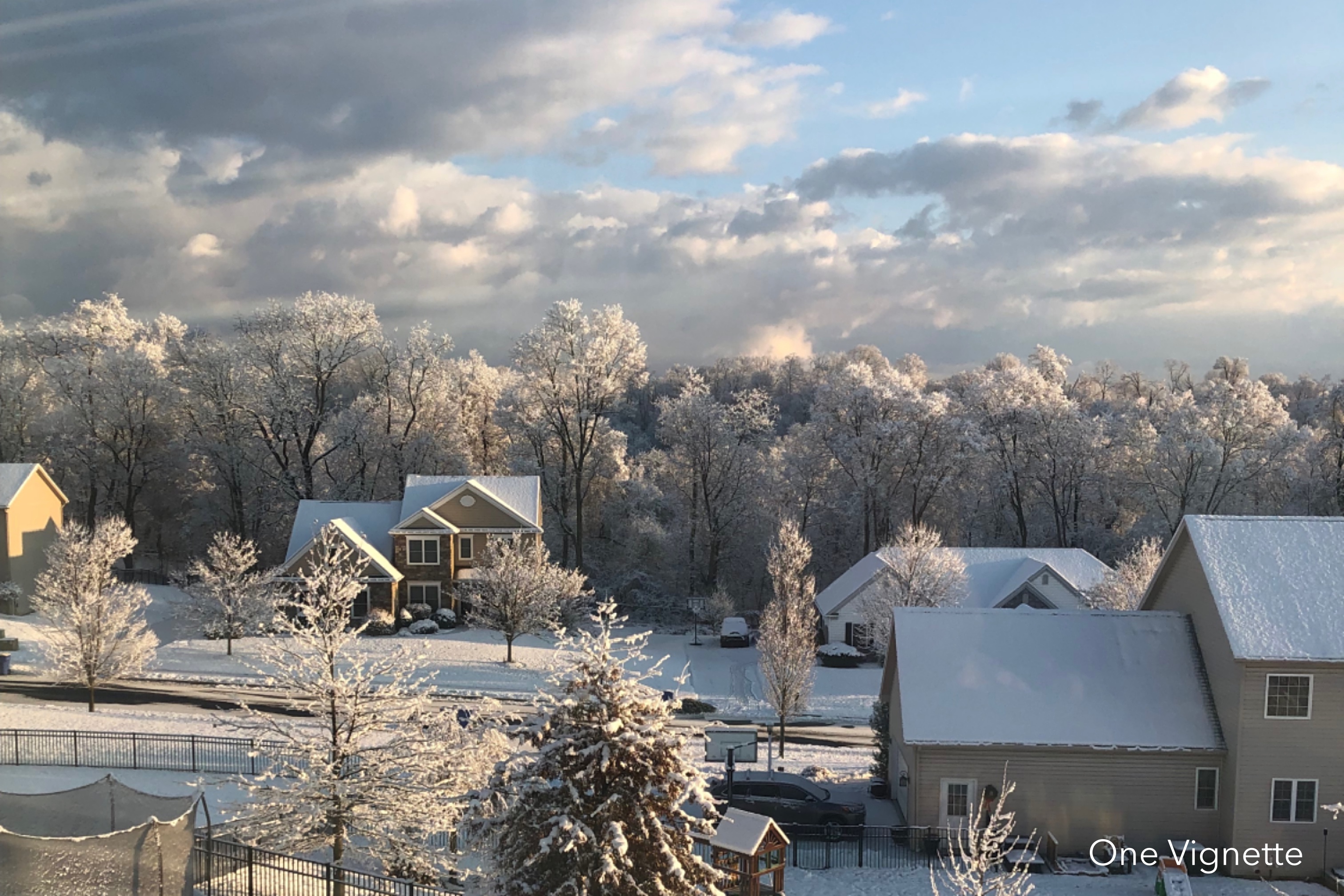 We had a snow storm in our area last week, primarily because David was away for work, and when David goes away for work, the skies decide it’s a good time to dump at least six inches of unexpected snow onto our large driveway. Saoirse and I got it shoveled right away that afternoon, thanks to her enthusiasm for physical exertion and my stubborn will to keep going and ignore the spasms in my bad back (three large pregnancies with three very large babies broke me). When we woke the next morning to a blessed, much-needed, two-hour school delay, a snow squall was rolling through the neighborhood, covering the driveway with a powder-sugared coating that hid the pretty, sparkly, inevitably painful sheen of sheer ice that lay beneath it.

As the kids were getting bundled into their hats and gloves and coats for school, I backed the car of the garage to make it easier for them all to pile in with their backpacks and instruments and lunches. I’d asked Quinlan to take out the dog before we left, but when I looked over from my spot in the warm driver’s seat, here’s what I saw: my little girl was on her stomach and sliding ever so slowly–against her will, mind you–down the driveway. She looked up at me in shock while her knees (bare knees, because #catholicschool) and elbows did their best to hold her up as Riley, paws skittering across the ice, dragged her in slow motion down the driveway. (You guys, it’s a pretty long driveway.) Quinlan couldn’t find purchase on the concrete-turned-skating rink to stand up, and I shouted at her to let the dog go as I threw open the car door to help her. God bless the kid: she hadn’t let go of that leash. But then I moved to get out of the car, and the next thing I knew, my left leg was sliding back under the vehicle, and, like quicksand, pulling me out of and then under the car like so much cake batter pouring out of a bowl. Imagine Gumby, or a Slinky. I flowed out of the car, really, which sounds super graceful except that a) I was yelping as it happened, and b) it hurt. My biggest fear was that I’d slide all the way under and nobody would be able to drag me back out again until the spring thaw.

(Quinlan laughs when I get to this part of the story because she said that as she was stuck on her stomach, gliding along behind Riley, I was rolling around on my back beside the car like an overturned turtle shouting, “Quinn?? Do you need help?! I’m coming to help!”)

There were neighbors who were outside witnessing all of this, by the way. Because of course there were.

Both Quinlan and I were finally able to get up on our very shaky legs, and I sent her (“Slowly, Quinn! Walk slowly!”) back into the house to change her wet knee socks. I shuffled off behind her to get the dog, who, by now, was fed up with the both of us and taking a giant poop on her leash, and by the time I turned back around, Cian had appeared in the middle of the driveway. The last time I’d seen him, he’d been gathering up his coat and gloves inside the house, but now he stood there, arms jutting out from his sides, because he was covered from top to bottom with snow. “Mom,” he said. The look on his face was matter-of-fact. “I fell.”

But then there’s this: Saoirse came swanning out of the house just then, clueless to the tumbling bodies she will soon learn to pretend are not her family members. She was wearing ear muffs, a pink coat, and fuzzy gloves. Her backpack was over her shoulders, and she held her water bottle loosely in one hand. She was dry and tidy and calm, and as I called out to her to be careful, the driveway’s icy, walk slowly in those darn uniform boat shoes, my oldest child deftly took the dog by her collar to lead her back into the house (I having already disposed of the disgraced leash), then glided over to the car and got in without nary a slipped step.

I’ll be back to you next week with an update on my mom. In the meantime, I’m installing ice cleats on the bottoms of all my shoes. 2020, I’m coming for you.

Take care of yourselves, too.

Running into this week like ⤴️. . When I get

I’m having a moment, so bear with me: I don’t

So. I used the family room fireplace today. . #swe

I posted something new to One Vignette today. (Tha