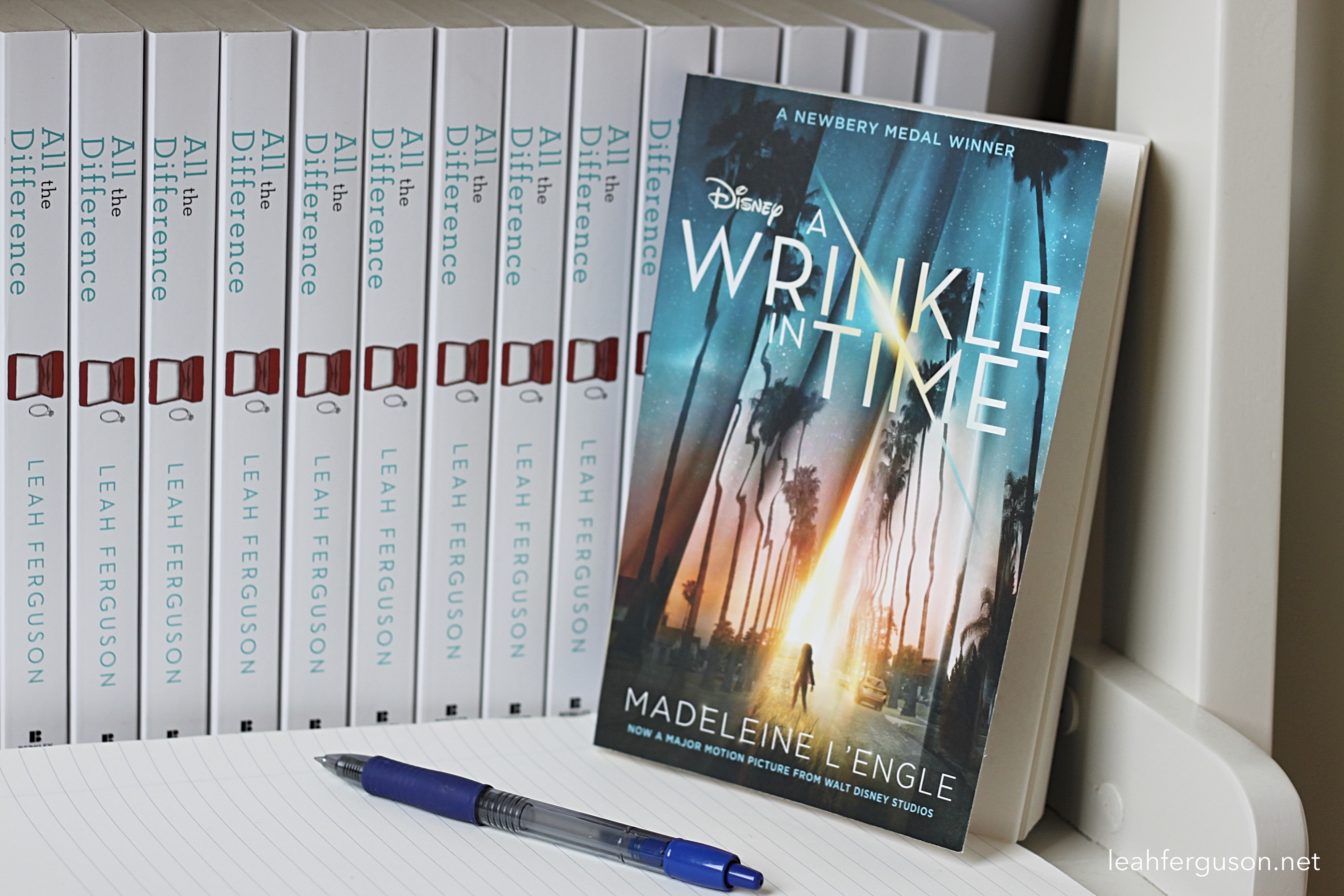 I’m reading Saoirse’s copy of A Wrinkle in Time before we see the movie next month (that’s not an ad or anything–we just really want to see the movie). She passed it off to me with an, “It’s good, Mom. I think you’ll like it,” and she’s right. I’m not a big fan of fantasy books, children’s or otherwise, but with this one the characters have drawn me in.

It’s always about the characters.

Women’s fiction writers are big on character: character-driven stories are cherished over plot-driven, the emotional struggles explored more than the external ones. All the Difference was quite obviously this kind of story–those big cartoon engagement rings on the cover will tell you that–but what’s funny is that I never really read a lot of women’s fiction before I realized I was writing it. And it’s because, when I sat down to read, I was looking to escape to a character who–while possessing some qualities with which I could relate–was completely different from me. So I always turned to books that told stories very different from my own. But I started out writing women’s fiction, which is where I made a rookie mistake: I live the female’s “emotional journey” every day, which made it easy, at first look, to write. But what I needed to do more of was think about a character I wanted to read: somebody quirky in a different way than I am, someone with different interests–someone who, despite struggling with some universal conflicts most of us can appreciate, is, on the outside, someone new to me. Unique. Someone different.

Which leads me back the characters in fantasy, and why I–while writing my plain Jane, “upmarket” contemporary fiction–need to start emulating them more. Why?

Because they’re what people love to read. Why have I never really sat down with this before? My agent told me way back when I was revising ATD that I needed to give Molly, my protagonist, some deficiencies–quirks and idiosyncrasies that weren’t exactly flattering but made her human. I struggled with it. I wanted her to be perfect, thinking that if she were, whatever bad happened to her would have that much more of an impact.

But that’s not the way we’re supposed to write books. And it’s certainly not the way to create characters that draw a reader in. A character like that isn’t even human, let alone relatable. The most beloved books in the world are made up of characters who are spectacularly different: Calvin and Charles Wallace and Meg in A Wrinkle in Time. Any non-muggle in Harry Potter. The beloved superheroes of DC and Marvel who are normal people by day but have powers and secrets beyond comprehension. All of those characters feed into what we feel as very human readers:

In real life, we all want to fit in, be accepted, be seen as normal. There’s a reason why, in the fall, you can’t go to a single apple/beer/orchard festival without stepping into a sea of boots and vests:

But on the flip side, every single one of us also has a quiet feeling that we’re different from the rest of everybody else. We want to be unique, we want to be seen as special, we want to stand apart, as much as we want to be accepted. Some of us embrace that and go into theater or politics. But the rest of us? Well, the rest of us jeer at the theater kids or the politicians, all while quietly wondering what makes them think they’re so special. We are afraid of the different people. We also feel like we kind of are them.

That’s what’s so fascinating about the big personalities in our lives: they could very well be us if we didn’t hide our secrets, or if, conversely, we actually showed off our quirks. People don’t gossip about the cousin in the khakis and the polo shirt who enjoys his steak medium and prefers lager over a fish bowl margarita. They want to talk about the aunt who recently shaved one side of her head and got that tattoo on her foot and is she really going to school for molecular biology with that criminal record?

We like the quirks. We secretly think we have the quirks. And when we escape into novels from our everyday lives where we try very, very hard to walk the straight and narrow, the quirks are what we want to read about, so long as they’re packaged in someone we can identify with, belong to, understand.

So, my writer friends, take a look at the story you’re working on now. What makes your protagonist different? A little odd? What makes her someone you’d laugh at or gossip about or watch curiously, because you’re not really quite sure if you’ve got her pegged?

What makes her special?

It’s something to think about. Madeleine L’Engle knew how to do it. J.K. Rowling hit a goldmine with her knack for bringing out the odd. And ask every single lover of comic books why their favorite superhero is their favorite. Maybe we should be reading more fantasy. The real world, after all, underneath the exterior, is certainly not all Han Solo vest/boots combos. It’s certainly not perfect.

It’s up to us to dig out the different, to uncover the idiosyncrasies. It’s up to us, the writers, to show the flaws and weirdness and uniqueness we all quietly think we possess.

Because there is no perfect.

There is only fantasy.

See You on the Flip (Phone?) Side: Leah’s Doing a Digital Detox

Hiya, friends. Life in Brain Cancer Land has been frustrating this week. Mom is declining…